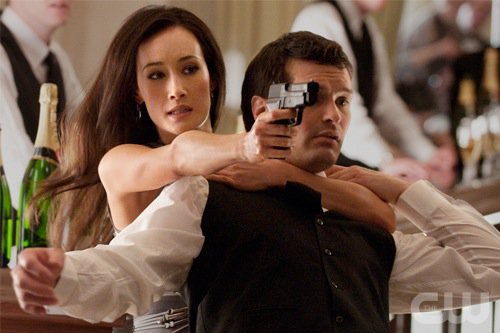 When she was a deeply troubled teenager, Nikita (Maggie Q, “Live Free or Die Hard,” “Mission Impossible 3”) was rescued from death row by a secret U.S. agency known only as Division, who faked her execution and told her she was being given a second chance to start a new life and serve her country. What they didn’t tell her was that she was being trained as a spy and assassin. Throughout her grueling training at Division, Nikita never lost her humanity, even falling in love with a civilian. When her fiancé was murdered, Nikita realized she had been betrayed and her dreams shattered by the only people she thought she could trust, so she did what no one else before her had been able to do: she escaped. Now, after three years in hiding, Nikita is seeking retribution and making it clear to her former bosses that she will stop at nothing to expose and destroy their covert operation.

For the time being, however, Division continues to recruit and train other young people, erasing all evidence of their former lives and turning them into cold and efficient killers. One of these new recruits, Alex (Lyndsy Fonseca, “Kick-Ass,” “Desperate Housewives”), is a beautiful girl with a violent past and a story not so different from Nikita’s. After her parents were murdered, Alex’s life completely derailed. Haunted by her horrific past, she ended up drug-addicted and homeless until Division “rescued” her and brought her into the fold.

Division’s top authority, Percy (Xander Berkeley, “Kick-Ass,” “24”) spent years being a good government soldier, taking his role as an insider and using it to turn the secret organization into a lucrative spy-for-hire shop. With Nikita gone rogue, Percy will do whatever it takes to destroy her and protect the empire he’s built, and he often turns to his top lieutenant, Michael (Shane West, “ER,” Once and Again”), for help. Michael trained Nikita when she was a recruit and is now faced with the responsibility of tracking down his renegade student. At the same time, Michael is in charge of training Alex, Nikita’s young replacement, along with other recruits, including Thom (Ashton Holmes, “Boston Legal”), who has been at Division for a year and is anxious to prove himself, and Jaden (Tiffany Hines, “Bones”), a beautiful and tough young woman who challenges Alex at every turn.

The recruits all spend part of their training with Amanda (Melinda Clarke, “The O.C.,” “The Vampire Diaries”), a master manipulator who can turn any ugly duckling into a swan and any bleeding heart into a killer. Her use of psychological warfare and strategy is key to Percy’s entire operation. Amanda has only had one failure during her tenure at Division: Nikita, the recruit she was never able to break.

Nikita also left her mark on Birkhoff (Aaron Stanford, “Traveler,” “X-Men: The Last Stand”), the nonconformist computer genius who was caught hacking into the Pentagon’s system from his college dorm room and was recruited into Division at the same time as Nikita. Birkhoff never admits to anyone that he misses his former colleague, and he has managed to hold onto his own rebel spirit, his geek-speak and his slacker dress code.

This is the world of Division that Alex now finds herself facing everyday, and she is just beginning to understand why the legendary Nikita has dedicated herself to taking them down. – The CW

This is the second attempt by American television to bring the French film La Femme Nikita (which was turned into the 1993 American film, Point of No Return starring Bridget Fonda) to the small screen and it is the most ambitious and best written and performed yet. That doesn’t mean that it’s great or that I love it.

This is a pretty short review because there’s not much to say about it.  The premise is exactly what the show description says it is and Maggie Q brings sexy to a whole new level here and the violence and action is on par with the best of any action show of the last decade.

The plot is pretty compelling, if not that original but the supporting cast is doing nothing for this show except for Nikita’s protegé Alex who is a plant in Division to bring it down. The only problem with Alex is the ridiculously convoluted way that she was able to infiltrate Division to begin with.

At the end of the day, it’s a decent show but I’m not sure how much patience audiences will have for it but I expect to personally give it until at least mid-season.

After a long bout with prostate cancer, iconic American actor Dennis Hopper passed away on Saturday, May 29, 2010 at the age of 74 at his home in Venice Beach, California surrounded by friends and family.  Hopper, best known for his roles in Apocalypse Now and the counter-culture classic Easy Rider, had a career that spanned more than 50 years in film and television dating back to such classics as 1955’s Rebel Without a Cause, 1956’s Giant and one of my personal favorites, 1967’s Cool Hand Luke.  What made Hopper so unique in my opinion was the incredible amount of diversity in his roles and his ability consume each character as if the roles were written for him.  Whether playing the drug-dealing outlaw biker Billy in Easy Rider (the landmark film that Hopper directed, starred and wrote which earned him a Best Writer Oscar nomination in 1970) or the basketball-loving town drunk Shooter in Hoosiers,  (the role that earned him a Best Supporting Actor Oscar nomination in 1987 and his only Oscar nomination for acting) or the psychopathic Balkan warlord, Victor Drazen on the first season of 24 or Colonel Eli McNulty on the short-lived Jerry Bruckheimer Special Ops Thriller series E-Ring on NBC from 2005 – 2006,  there simply wasn’t a role that Hopper could not play.

Hopper was perhaps the world’s greatest character actor who just happened to be a superstar.  I’m reminded of just how good Hopper was when I think of his performance in my favorite role of his, that of retired cop Clifford Worley, father to perpetual loser with-a-heart-of-gold, Clarence Worley (Christian Slater) in True Romance.  In this 1993 cult-classic directed by Tony Scott and written by Quentin Tarantino, Hopper took what was in essence a cameo role and made it into the most memorable role in the film and single-handedly manufactured the most brilliant scene of the film.  Every time I see this film I have to ask myself if Tarantino wrote this scene specifically with Hopper in mind because no one could have handled the scene between Clifford Worley and Vincenzo Coccotti (Christopher Walken) as masterfully as Hopper and I wonder if Tarantino knew that this little ten-minute scene was going upstage every other performance in what was one of the best films of the decade.  Honestly, you almost forget how good this movie is overall because of the famous “interrogation” scene with Walken and Hopper.

Dennis Hopper was a legend who indelibly left his mark on film and screen and I feel blessed that I had the pleasure of experiencing his genius within my lifetime.  Hopper left behind four children, including a seven year-old daughter named Galen, and two grandchildren, Violet Goldstone and Ella Brill.

For more information about the life and career of Dennis Hopper, visit IMDb.